Posted by Hamilton Street Trees on June 06, 2017
What does appre-tree-ation mean to you? To some readers, it is inevitably just an over-stretched pun,  however to us at the Street Tree Project, it is also an over-stretched, hard to pronounce, pun; but one with significance! We will be starting a new campaign of weekly appre-tree-ation, honouring trees in the Homeside/ Crown Point East community (the targeted neighbourhoods of this year's project). We encourage everyone to admire the trees that already decorate the streets of this community, as we work to implement a new generation of young trees in and amongst them. 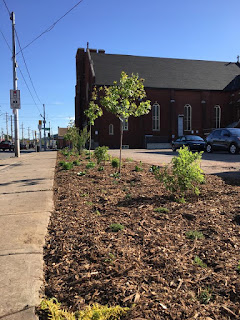 To start the campaign we are celebrating the new life of a Red Maple tree that may pull (haha) you out of the house to go and admire it. It was just planted June 3rd by Green Venture and local volunteers at the Depave Paradise event on Kenilworth for Hamilton's 100in1day.
Maple trees are one of the most iconic symbols of Canada, and thus their presence in our cities are almost inevitable. One staff member at Hamilton Forestry stated that maple's represent the largest proportion of the cities urban tree canopy. Some of the most widely preferred features of Maple Trees are that they are a native species, indicating success in our local climate and soil, as well as a sense of national pride, as well as their beautiful, fall plumage.
We are excited to watch this little maple grow into a significant source of shade, safety, and shelter for many different creatures, both human and non, in the years to come.