Posted by Randy on March 08, 2017
OPIRG McMaster is seeking a student Street Tree Project Coordinator through the McMaster Work Program for Spring/Summer 2017. 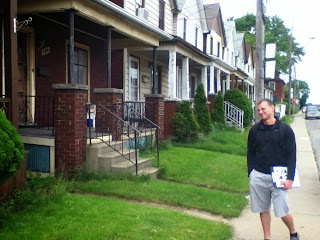 For the past four summers OPIRG has hired a student staff to implement the Street Tree
Project. We piloted the project in the Summer of 2013 in Hamilton’s Keith Neighbourhood in Ward 3.

The project was designed by Randy Kay using mobile air quality data from Clean Air Hamilton, satellite mapping to identify areas lacking trees (which coincided with neighbourhoods with higher than average air pollution and lower than average incomes), and a partnership with the ward councillor and the city forestry department.

Our method is to go door to door and sign up residents for a free city street tree for the front of their homes. As a result, we successfully increased the average street tree requests from three to 75 in a two month period (May and June) in 2013.

The project expanded in 2014 to the Crown Point Neighbourhood where we received over 80 requests for Street Trees. Our third year focused on Ward Three’s Gibson/Landsdale Neighbourhood in 2015. 2016 found us back in Ward Three, going door to door in Gibson, Landsdale and Stipley neighbourhoods and netting 62 tree requests.

Our work has received positive media attention and a “community builder” award from Volunteer Hamilton and the Hamilton Spectator.

"Four different students have directly made a lasting impact on these neighbourhoods that will pay dividends in terms or air quality for decades to come."

The Street Tree Project Coordinator will further implement the project for 2017.

Applications require a cover letter, resume and approved work program form and should be submitted through MOSIAC. (link to job on MOSIAC)

OPIRG welcomes the contributions that individuals from marginalized communities bring to our organization, and invites aboriginal people, people of colour, poor and working-class people and those on social assistance, women, gays, lesbians, bisexuals, queer-oriented people; transgender, transsexual, intersex and two-spirit people; single parents, members of ethnic minorities, immigrants, people from non-academic backgrounds and people with disabilities to apply. We encourage applicants to describe the contributions and experiences they would bring to the OPIRG organization in their cover letter.