Posted by Unknown on November 03, 2014
The Street Tree Project has been officially done for the summer since July, but make no mistake, our efforts to put trees on the streets of Hamilton are still going strong. About a month ago, on October 4, one of our summer volunteers, Anna (who was also a part of the Cable 14 feature of us!) took a group of students canvassing door-to-door again in Crown Point. 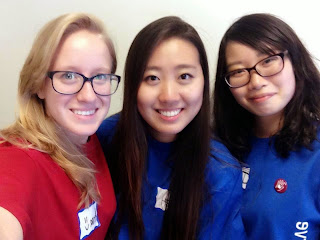 Over the course of the summer, OPIRG's StreetTree Project had spoken to organizers of the McMaster Student Success Center's annual MacServe Day of Learning. The Day of Learning allows McMaster students to sign up to spend a day working with a group on a service project. MacServe offers a variety of placements, all including some introduction to the area or program with which students will be working, and following up with a debrief afterwards. As one of the options that students could sign up for this year, the StreetTree Project drew some more attention from students, spread the word about free trees in Crown Point, and signed up three more residents for a Street Tree!

Outside of  the McMaster community, the StreetTree Project is also being taken up by residents of the Crown Point neighbourhood. Some residents expressed an interest in expanding the program in their community, so we met with Anne, who lives in the Crown Point neighbourhood, Rosy, who owns Narula's (a really delicious Indian restaurant in Crown Point which you should definitely check out!), and Giuliana, from the Hamilton Naturalist's Club to discuss how we could make that happen.
Rosy generously offered up her restaurant for the meeting, and exciting things have been planned for the future! We decided that we will hold a volunteer orientation at the end of November. The Naturalist's Club has a goal to increase green space in Crown Point, the OPIRG StreetTree project is aiming to help people find out about free StreetTrees that can be requested from the City, and the people who live and work in the community want to see their neighbourhood beautiful and healthy! Working towards a common goal, we're planning to host a volunteer orientation session towards the end of November for anyone interested in promoting trees in their neighbourhood! Keep posted for more information and to stay involved with the tree excitement in Crown Point!